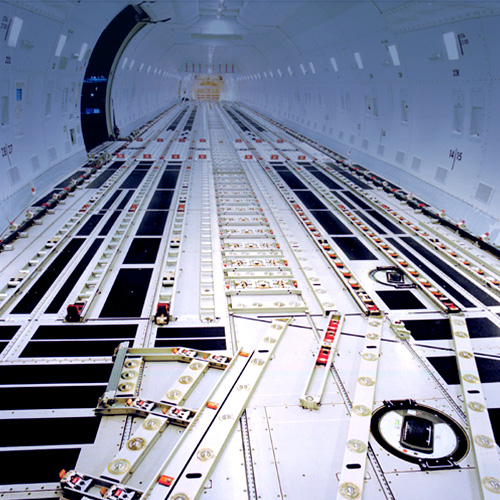 Recently the National Transportation Safety Board (NTSB) issued several recommendations to improve fire detection, fire suppression and containment of fires to be implemented on cargo aircraft.

Telair developed an as smart as well as simple solution for a ULD temperature warning system. An advanced warning of an abnormal increase in the temperature of cargo may result in an early warning and prevent the start of a fire.

Wide body cargo aircraft are normally nose to tail equipped with a power drive and control system on the main deck as well as within the lower deck cargo holds. Power drive units as part of this system can be equipped with temperature sensors. Since the power drive units are immediately underneath each ULD position, they are relatively close to the cargo. In combination with specific provisions to the ULDs, irregular temperature increases can be detected and trigger an aural or visual warning on the cargo deck as well as provide an indication in the cockpit of the exact ULD position affected.

Implementation will require a close cooperation between authorities, aircraft manufacturers, airlines and suppliers, but the system installation is easy to accomplish since the existing wiring of the cargo control system and cargo equipment can be used. The modifications to an aircraft therefore will have limited cost impact and require no extra aircraft downtime. For aircraft not equipped with a power drive and control system, similar solutions may be utilized.

Telair’s new ULD product line, can be standard equipped with the required provisions. The ULD temperature warning system combined with this new ULD product line, will provide besides an early high temperature warning, significant weight savings, improved ULD fire containment capabilities as well as ULD tracking features that will make your cargo operation ready for the next decade.